The Treasury has confirmed that it will be working with the ATO and an Australian Federal Police taskforce in investigating any cases of fraud related to the government’s COVID-19 stimulus measures. 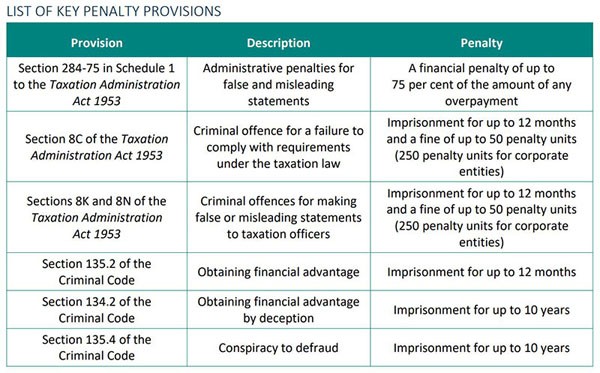 Fronting a Senate inquiry into the government’s response to COVID-19, Treasury Deputy Secretary Jenny Wilkinson confirmed that her department has been involved in discussions with a fraud taskforce established by the Department of Home Affairs.

“I am aware there is a fraud taskforce which is sitting within the Department of Home Affairs and I know the Australian Federal Police are involved in that taskforce and it is also the case that the ATO and Services Australia are involved in those discussions,” Ms Wilkinson said.

The Treasury’s confirmation comes after Home Affairs Minister Peter Dutton had warned businesses that any attempt to fraudulently access stimulus measures, including the JobKeeper payment, would be dealt with swiftly by the new AFP taskforce.

“Those people need to hear a very clear message: now more than ever, you are likely to be caught,” Mr Dutton told 2GB radio.

“With those people who claim with good intent but have done the wrong thing, they will have to repay that money, but the criminals who exploit the system, the technology that we’ve got now to look at algorithms, look at transfers, to look at money diverted to different shelf companies — those people will be under a lot of scrutiny. They should think twice about what they’re doing.”

The ATO has been unequivocal about fraudulent schemes, warning that it will pursue action against business and agents that engage in such arrangements.

The Tax Office has listed out a number of schemes that may be used to artificially create or inflate an entitlement to the cash-flow boost, and will also begin applying scrutiny to arrangements that help an entity satisfy the turnover test to qualify for the JobKeeper payment.

“Integrity rules are in place to deny or reduce an entitlement to JobKeeper payments if schemes are contrived to ensure payment conditions are satisfied, such as temporarily reducing or deferring turnover. Exceeding your turnover predictions by itself does not trigger these integrity rules,” the ATO said.

“Our compliance focus will be particularly directed towards schemes where there has not been a genuine fall in turnover in substance, but arrangements are contrived to ensure the turnover test is satisfied.”